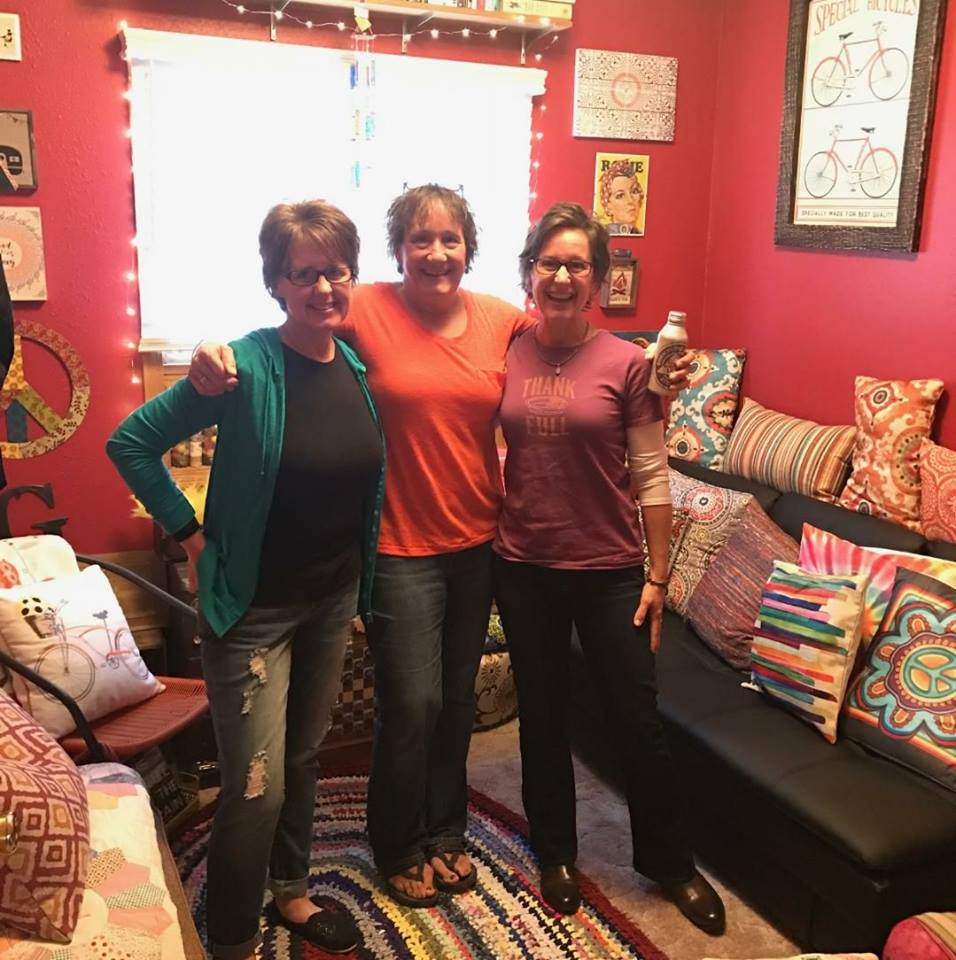 This post was written in January, as I was preparing to launch my blog.   (Clearly, it took me a bit longer than that.)  There will be no post next Sunday night, as one of my sisters and I are taking the trip we postponed as described below.  Of course, there will be a post about this trip when I get back—Thanks for visiting my blog!

Another mass shooting occurred in a major airport in our country just a few days ago, a day after I was scheduled to arrive in a nearby major airport—with one of my sisters.  We had already postponed the trip due to an ice storm here, and bad weather there.

In the name of my kind of peace, I am writing about this awful reality.  I didn’t mean to make it so heavy so soon, but it begged to be written, so here it is.  I promised to keep these posts optimistic, so I will bring you back up before the end.

Our mother used to ask “Why can’t people just get along?”  Good question, Mom.  Let’s dissect it.

What in the world can we do to keep this madness from happening again in this crazy world?  We feel helpless, we feel paralyzed with fear, but that gets us nowhere.

FEAR:  False Evidence Appearing Real.  I found that acronym and its meaning written somewhere in Mom’s handwriting after she was gone.  I had seen it before, apparently it was one of her favorites; she wrote down what she liked.    It’s a good one.  Fear is paralyzing in itself, and it gets us nowhere.  And there is usually no good reason for it.  Like when I am flying.

Mom loved to write.  Not books or poetry or anything long, but she would write quotes, quips, and letters.  None, however, were more memorable than The Letter.

The Letter Mom left was a masterpiece, a directive; a treasure. She kindly asked us, after telling us this would be the last time she would try to tell us what to do, to live lives of peace.  She was specific about her request; she left it in no uncertain terms, no easy ways out; no loopholes.  (I’ve looked hard, there are none.)  She asked us in front of 500 people, leaving it with a note to be read at her funeral.  She asked us to live our lives by the Prayer of Saint Francis, commonly known as the Prayer for Peace.

Saint Francis was clearly a Christian, and while he is most commonly associated with the Catholic Church, he is revered and honored by many Protestant churches as well.  He is known as the patron saint of animals, and many churches observe his feast day of October 4th with a ceremony to bless animals. 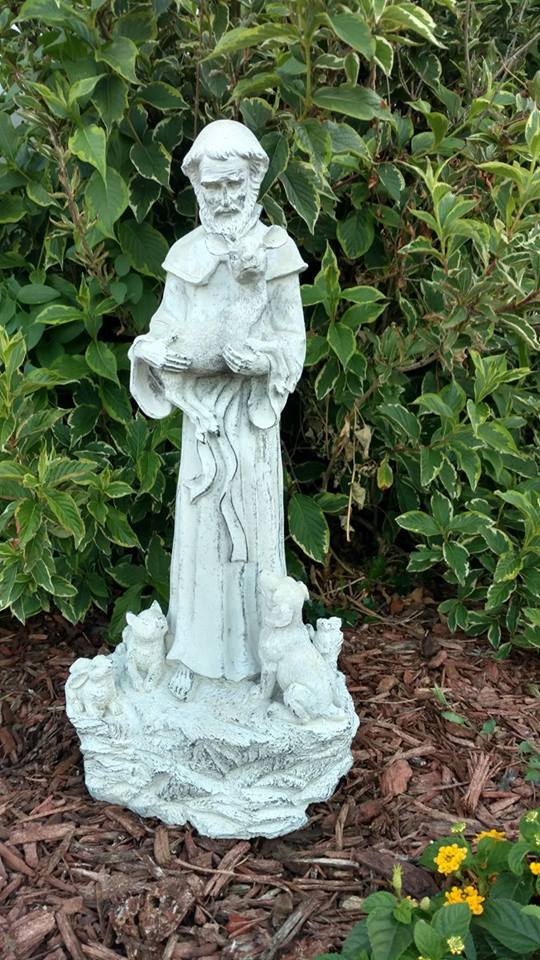 Please know that I respect any religious views, as long as they don’t hurt anyone else.  A major tenet of all world religions is kindness toward other humans, and this prayer exemplifies that very principle.   I am biased, I know, but I feel the core of this prayer is a universal message that needs to be heard, whether you are a Christian or not, a believer or an atheist.

Saint Francis was a living, breathing, imperfect human being who struggled like we all do, but also in a unique way that most of us likely never will.  He was born into a wealthy family who prospered in the textile trade.  He lived in Assisi, France from 1181-1226 A.D.  He chose to give up his riches, privilege and a life of comfort in order to lead the life that led him to write the following prayer. 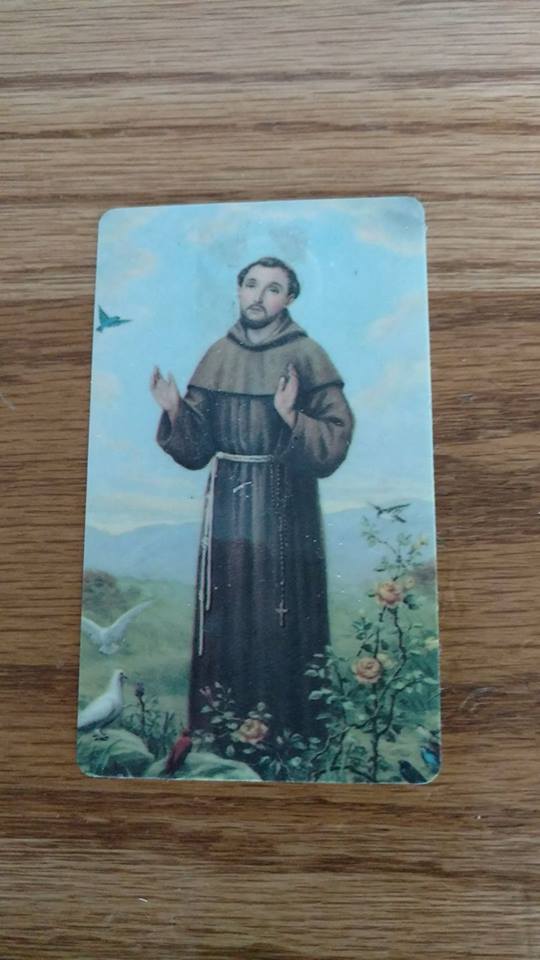 “Make me an instrument of your peace.”  It begins.  Note that it doesn’t ask for peace to be delivered on a platter to the person praying it, it asks for them to be a vessel, a tool, a worker bee.  It goes on to cover every possibility, every eventuality that any human could encounter, any situation whereby one may expected to be this instrument of peace in a situation that needs it.  It actually asks for work to be heaped upon the person praying it.

“Where there is hatred, let me sow love.”  We were never allowed to use the “H” word in our house, not in reference to a person.  We could hate their actions, but we couldn’t hate them.  She was grooming us for this task even then.

“Where there is injury, pardon.”  Mom loved the sitcom “Happy Days,” we all did.  Especially Fonzie, who could never say he was ‘sorry.’  He would drag the ‘s’ out, starting with “I’m ssss…,” but he could never completely say he was sorry; couldn’t utter that word.  For most of us—myself included, saying “sorry” is hard work.  Harder than that, is forgiving the person who cannot say they are sorry, even when they know they should—like Fonzie.  Hardest of all is forgiving the person who doesn’t even know they wronged you.

As a writer, I keep a prayer journal.  I try to write daily, petitioning for my own needs, as well as for so many hurting people.  In my imperfect efforts, I try—as much as it hurts—to pray for those whom I feel have wronged me.  It is hard, so hard that I can only write their initials.  There are seven sets of initials I write each time.  Not long ago, I looked back over those seven sets of initials, representing seven separate hurts I carry around.  I realized that if all seven could see their initials there, and know why they are there, five of them would likely say “What did I ever do to you?”  Some may even have the gall to say “You hurt me, I didn’t hurt you.”

Most of us, I feel, carry around such hurts, and the person who inflicted the pain on us has no idea, no sense that they did anything wrong.

Forgiving them, forgiving myself and moving on is the pardon this prayer speaks of.

“Where there is doubt, faith.”  Mom had an undeterred, rock-solid faith in God.  All she had to do for this one was set her example for us to see in her every action, every word, every deed, and every thought, when we were able to read them.  We usually couldn’t.  She remained a mystery in a good way.

“Where there is despair, hope.”  None of my siblings remember her saying it, but I do.  One of her best quotes—I think—is this: “Since I gave up hope, I feel so much better.”  In her infinite wisdom, I believe she was speaking of giving up hope only when it involved changing another person.  The kind of hope she wanted us to bring is the kind that shows people that faith in God can chase away the dark clouds that hang over all of us from time to time, sometimes hanging over some people too long for them to dispel them by themselves.

“Where there is darkness, light.”  I lived in several basement apartments in college.  Sunlight was a precious commodity in the little windows where it managed to seep in at certain times of the day.  After that, no matter where I lived, I maximized the sunlight through the windows.  I never shut the blinds during the day.  As I write this, I am just now realizing that perhaps my mother’s example in our childhood home set this tone for me. She pulled the curtains only when someone was lying sick in the living room—which became a temporary hospice room–in order to provide them the most comfort.  The curtains, where we had them, were always light colored.   We lived on a farm, so we didn’t have any peeping neighbors to worry about.   She always tried to live in the light.  Again, she was plotting.

“Where there is sadness, joy.”  At the expense of her own potential joy, Mom strived to bring joy to others.  She didn’t care about her own first, instead, she knew that if she brought it to others, then this would bring her the ultimate joy.  I continue to reap what she sowed, I find the seeds of joy she planted in small and large things in so many aspects of my life.  It is now my job to continue to harvest them, and most importantly, replant them for others.

“Oh divine master, grant that I may seek not so much to be consoled as to console,

To be understood as to understand,

To be loved as to love.

For it is in giving that we receive,

It is in pardoning that we are pardoned,

And it is in dying that we are born to eternal life.”

And there you have it.  A perfect prescription for living peace in everything you do, think, feel and say.  A tall order, I might add.  Since she put it in writing, and made sure it was read in front of everyone at their funeral, we really can’t break this contract, even though we didn’t agree to it; didn’t sign it.

Every day, I try to live by these words.  Gail gave all the females in the family a bracelet with this prayer engraved on it, and I wear it nearly every day as a reminder.   Most days I fail, some days I fail miserably.  But I keep trying.  I must give it my best.  If you’re not already doing it, I hope you will take these words and let them seep in, and then let them be the words you try to live by, too.

That was Mom’s wish in The Letter.  If we all follow Mom’s order, then perhaps her question would no longer have to be asked.

Along with The Letter, Mom left each of us a prayer card with this prayer on it.  We learned from her friend that she wrote The Letter about ten years before she died, and likely prepared the envelope with the seven cards in it at that time.   It’s the last gift—and the most meaningful gift she gave me to carry, and to carry on without her. 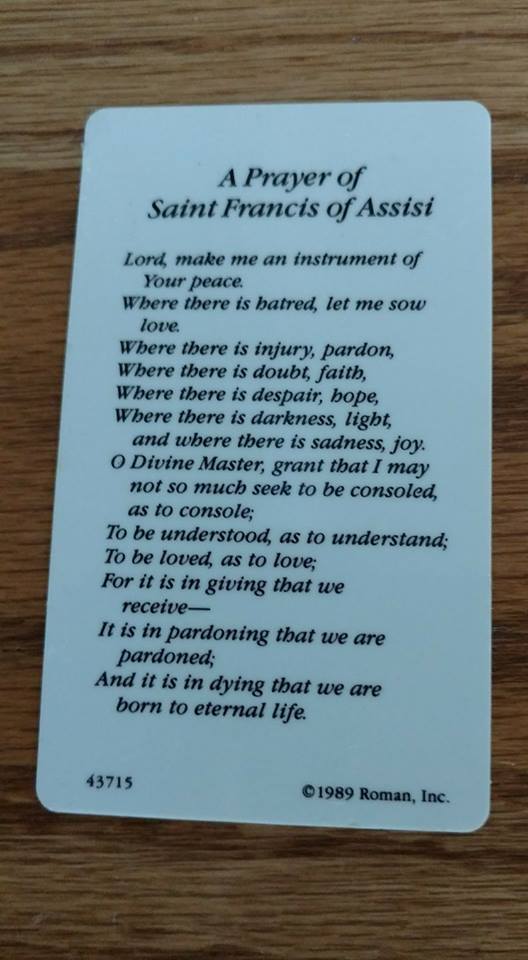 The original letter sits in a safe deposit box in a bank vault.  While it was read to 500 people at their funeral, it remains a valuable and personal treasure for the seven of us, her “Magnificent Seven,” as she called us.  Therefore, to honor this privacy, it will not be shared.

Instead, please know that my parents were incredible Instruments of Peace.  To honor that, we chose to have this prayer engraved on the back of their headstone.  Any act of peace—small or great—is a tribute to them, and to all of humanity.  We are all in this together.

It bears mentioning that Dad’s middle name was Francis.  And, our current pope–Pope Francis–chose his name in honor of Saint Francis. 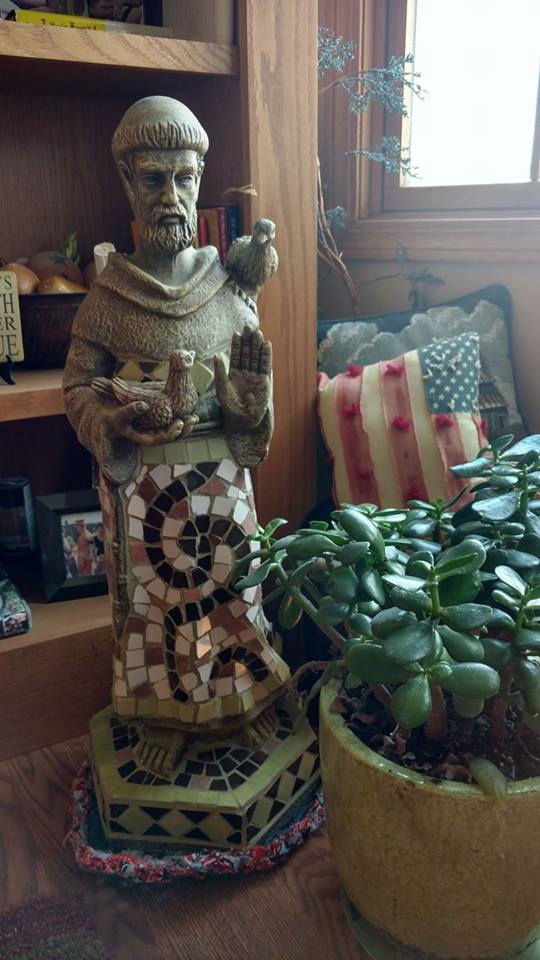