“Anticipation is the greater joy.”  —anonymous

Suzanne and I were recently discussing the subject of traveling.  How, while one is in the anticipatory stages, it seems magical.  The heightened sense of this is going to be so much fun builds, creating an experience of its own.  Then, when you get home, the memories of that was so much fun continue to build as time passes, perhaps surpassing the actual fun that was had on the trip.  I have found that during the actual trip, I find myself lamenting the fact that the trip is going too fast, and I can’t enjoy it like I had anticipated.  I want time to slow down so I can enjoy it more.  In effect, this actually takes away from the fun of the trip.

“Schedule something to look forward to.  Anticipation is like 401K matching for happiness.  Double the happiness.”  Eric Barker.   This is the essence of our Mom’s advice in “Something to Look Forward To.” (January 7th, 2018.)

I wish I could bottle up the feeling I get when I am planning a trip.  I would capture it and save it to be savored when I am experiencing the trip.  Because, weirdly enough, when the trip is happening, the feeling is not the same as when I am anticipating it.

Weird, I know, but Suzanne agrees with me.  Sometimes, the anticipation and then the recollection of the trip are the best parts.  When it is happening, it goes too fast, and the joy seeps through the cracks, getting away when all I want to do is slow the trip down, and roll the joy around in my mouth like a piece of hard candy, savoring it at the rate I choose, not the rate that the passage of time demands that I do.

Tonight—Friday evening, I am rolling a piece of hard candy around in my mouth that tastes like Iowa and Minnesota.  The memories of my trip last week are preserved inside that piece of candy, and, like a good meatloaf, they taste better after marinating for a few days.

Taking a few days off and heading north was just the medicine I didn’t know I needed.  I went with my dear friend Shari, picking her up in Kansas City after I left my small city around noon last Thursday.  We made our way north and a bit east, with Minneapolis, Minnesota as our final destination.

But not before we took a step back in time to 1995, detoured, and stepped upon the Bridges of Madison County, Iowa.

As any chick worth her salt knows, this movie is one of the best chick flicks of all times.  To see and feel the actual bridges that were filmed in the movie was almost sensory overload. 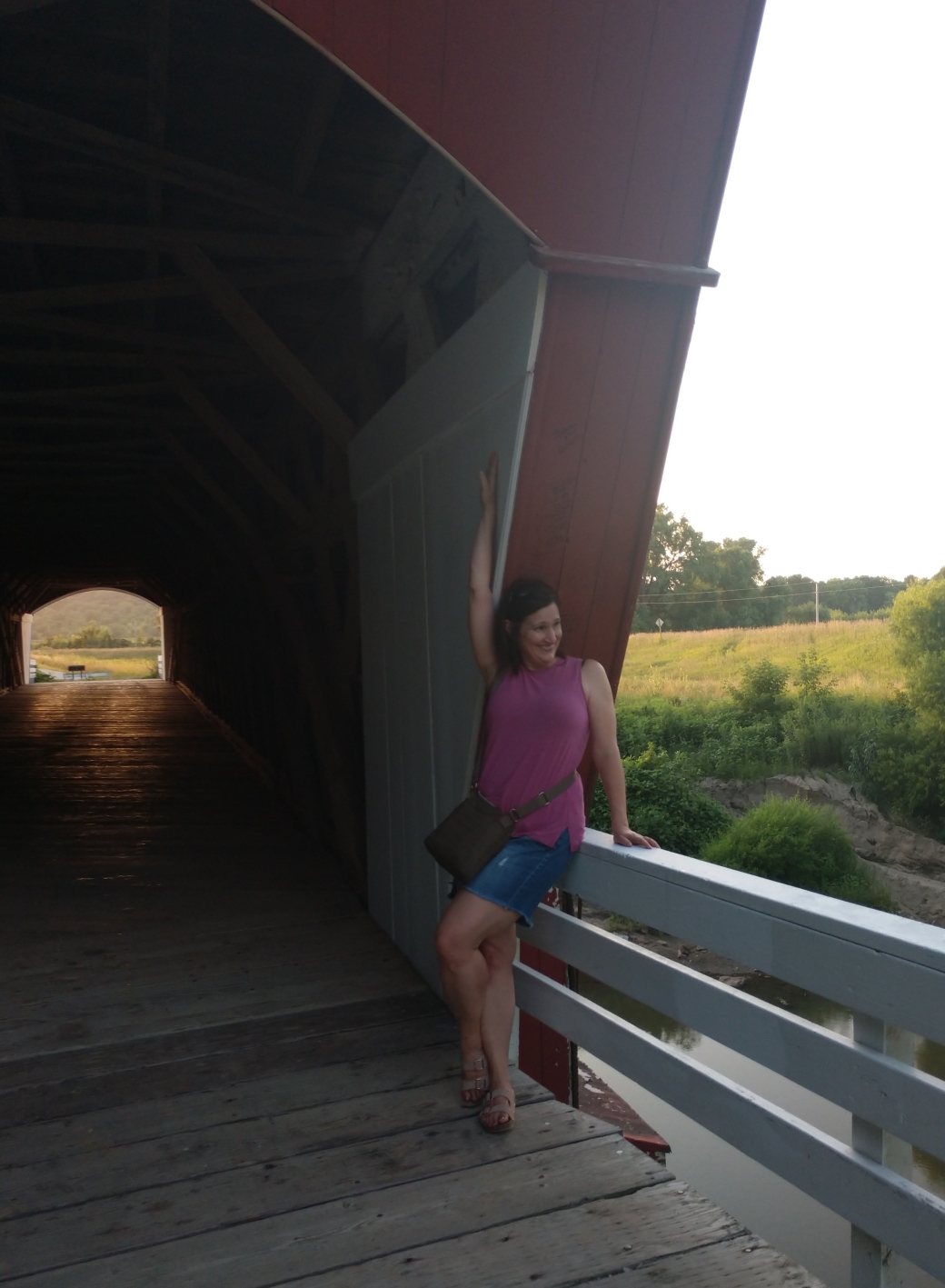 We struck our best Meryl Streep poses, as if Clint Eastwood himself may happen by. (He didn’t.)  After watching the movie again several days ago—it had been awhile, I realized we were on the same bridge—the Holliwell Bridge—on the same end of the bridge, and Shari was on the same side of the bridge that Meryl Stood 24 years ago as Clint photographed her.

But that was only a warm-up for the real deal.

My dear friends Amy and Kelly live in Minnesota, and seeing them again was better than seeing Clint would have been, had he showed.

Kelly was my neighbor until she moved to Minneapolis about seven years ago. 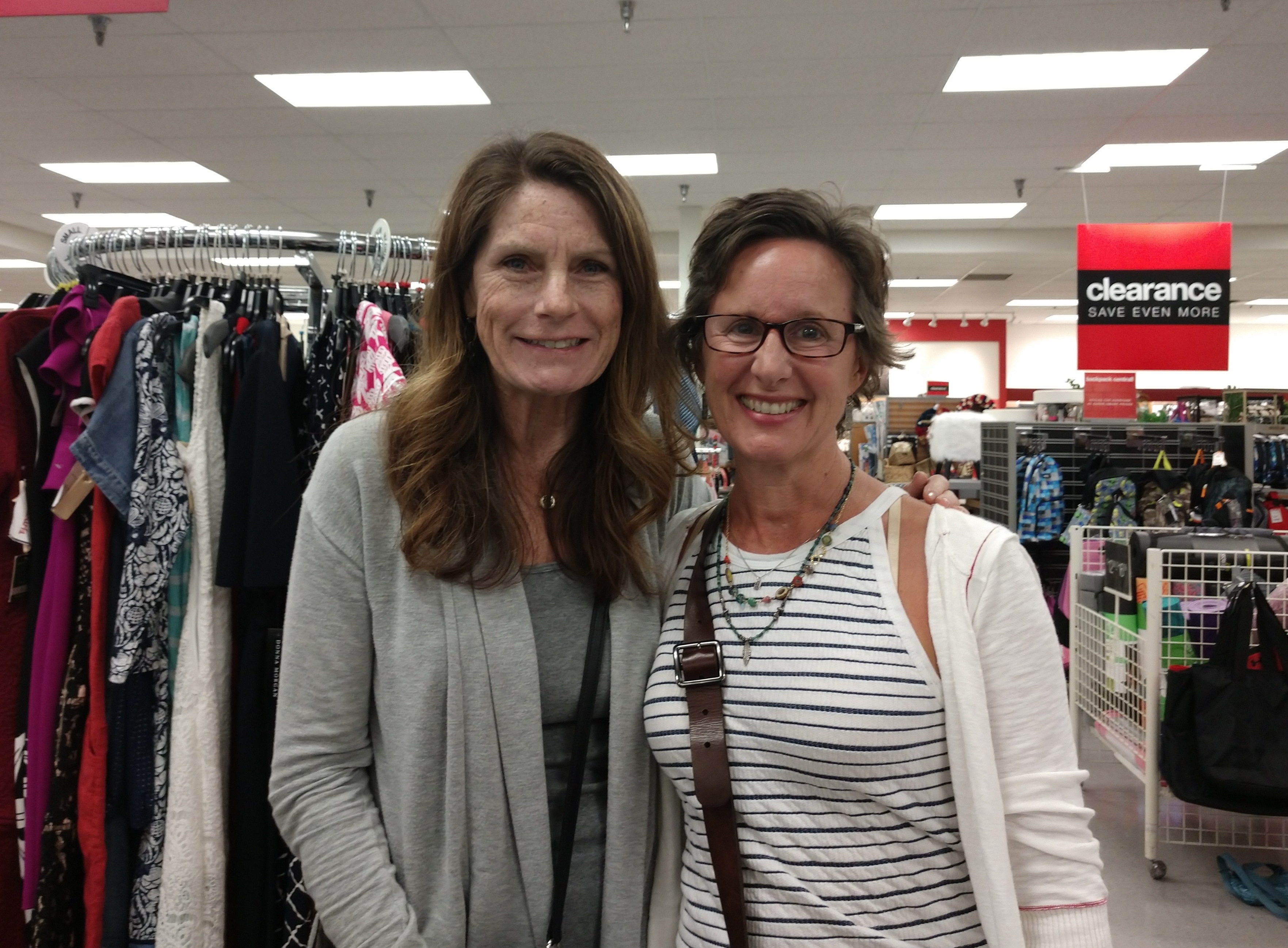 Amy got me started on my TJ Maxx addiction, so it was only right that we take our picture there.

Amy held me accountable to meet her for a daily run in 1990 when we both lived in Philadelphia, thus creating a good addiction. Had we not met, and had she not gently prodded me to pick this good habit up again, I may not be a runner today, which translates into I may not be have the energy to travel, or to get anything else done.  If I don’t run, I have realized, I don’t run.

We drove back through Iowa on the way home, catching an iconic 80’s rock band at the historic Surf Ballroom on Sunday night in beautiful Clear Lake, Iowa.

Good thing we planned ahead.

“The Day The Music Died” was written in honor of Buddy Holly of “Peggy Sue” fame, Ritchie Valens, (“La Bamba,”) and J.P. “The Big Bopper” Richardson (Chantilly Lace), because their plane went down in a snowstorm shortly after midnight after leaving the show in this ballroom.  REO Speedwagon paid their tribute to Buddy Holly with a rendition of “Peggy Sue,” with the audience singing along.

This somber piece of American rock and roll history is memorialized inside the ballroom, as well as at the crash site six miles outside of town.  The iconic black glasses mark the path to the site,

Which sits about one-half mile off the road next to an Iowa cornfield.

I didn’t catch the memorial when I was in Clear Lake five years ago, and I vowed to see it next time I went through.  It was worth the trip outside of town, and worth the walk.  History becomes more interesting and more important to me as I age, and this is a vital piece of rock and roll history right here.  In the half-hour we were there, we passed perhaps ten more people coming and going.  If you ever have the opportunity to see the Surf Ballroom and this memorial, I highly recommend doing so.

There was a time in the recent past that it felt like too much work to plan and execute a trip, but thank goodness that time has passed.  Staying home and reading about it is a far cry from actually experiencing a new place, but that’s where I was, and that’s where it felt most comfortable.

But comfortable is not always the most exciting feeling, and I needed more.  Now, after being home not even a week, I want to get ready to go again.

Gail and Suzanne have recently taken trips of their own as well.  Suzanne took a trip to South Dakota with her boyfriend, 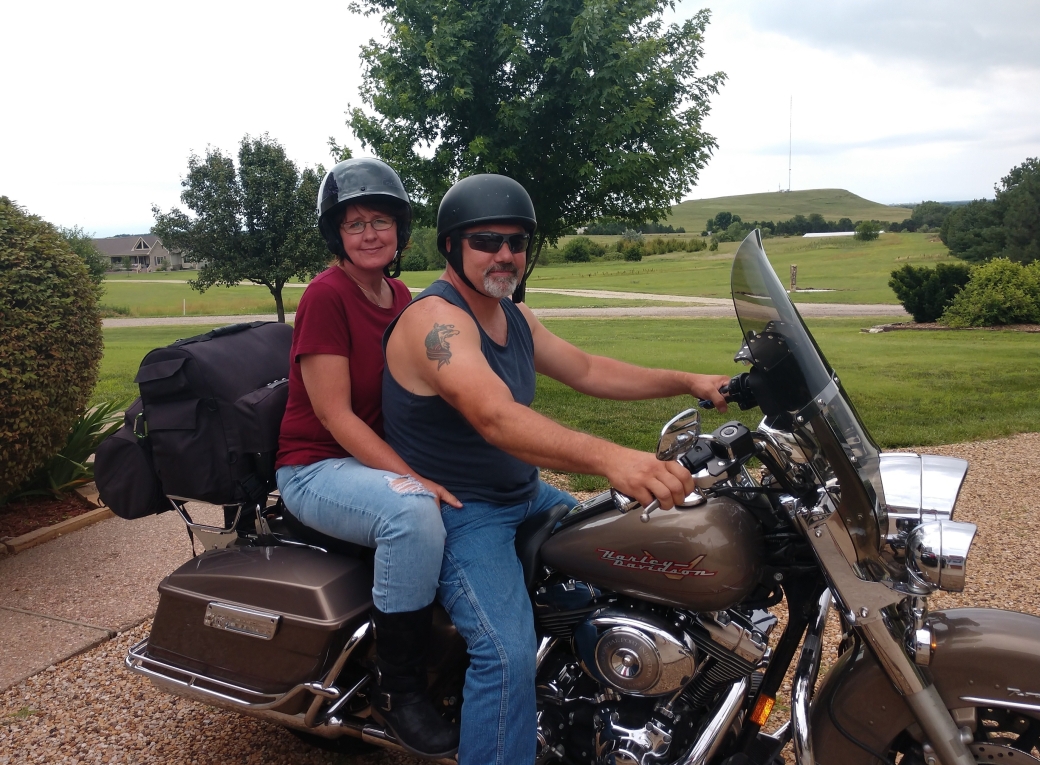 And Gail had a weekend mountain getaway with her husband.

Our travels without each other are an adventure in themselves, and necessary in order to spend time with others we are close to.  However, our annual Sister’s Trip is yet to come, and we will certainly share that when it does.

Speaking of Sister Trips, the six traveling sisters from “The Magnificent Seven” (September 2018) took their annual trip this week.  They met in Colorado Springs, and enjoyed each other’s company, as well as many of the beautiful sights in that area.

I had a surprise visit this week from our uncle and aunt.  Our uncle Don was married to our mother’s older sister, and our aunt Sharon is Mom’s youngest sister.  Don is 86 years old, and is retired from Beechcraft Aviation.  Don is blind, as were his wife and two children.  Sharon spends Wednesdays with him, helping him with appointments, shopping and errands, as well as a road trip some Wednesdays.

“I like to get out of the house and ‘see’ new places,” he said.  He uses the verb “see” in the same manner those of us with sight do, because he is truly “seeing” things in his own way.

I remember when I brought my aunt Jeanne, his wife, to our new home.  I led her through the front door, and closed it behind her.

“Oh my, this is a big room,” she said just after I closed the door.  It has a 20-foot ceiling, and she was able to tell this by the way door sounded when I closed it.  Anyone who cannot use their sense of sight to “see” relies upon their other senses to “see,” which is exactly what Don still does.

“I’d like to go to Kansas City.  I want to eat some of their famous barbecue, and I want to go to the museums,” he said.

He went on to tell me about other places in Kansas he’d like to see, places he has researched; some places I didn’t know about.  He told me about the cabin in Smith County he’d like to see, relatively close to our hometown.  It was where Dr. Brewster Higley wrote “Home on the Range.”  He wants to see the museum in Oakley, Kansas.  He also wants to go to Greensburg to see The Big Well, and to see the town that was rebuilt after the tornado on May 4th, 2007.  I want to go back there, too.  That town inspires me, just as my uncle does.

He is 86 years old and blind.  He lives alone. He has buried his wife and two sons.  He knows very well that travel is therapy indeed.  If you have the desire and the resources, but not the inspiration, please let my uncle inspire you.  If there are places you want to see, and you are able to see with your eyes, or with any other sense, then by all means, go see them. 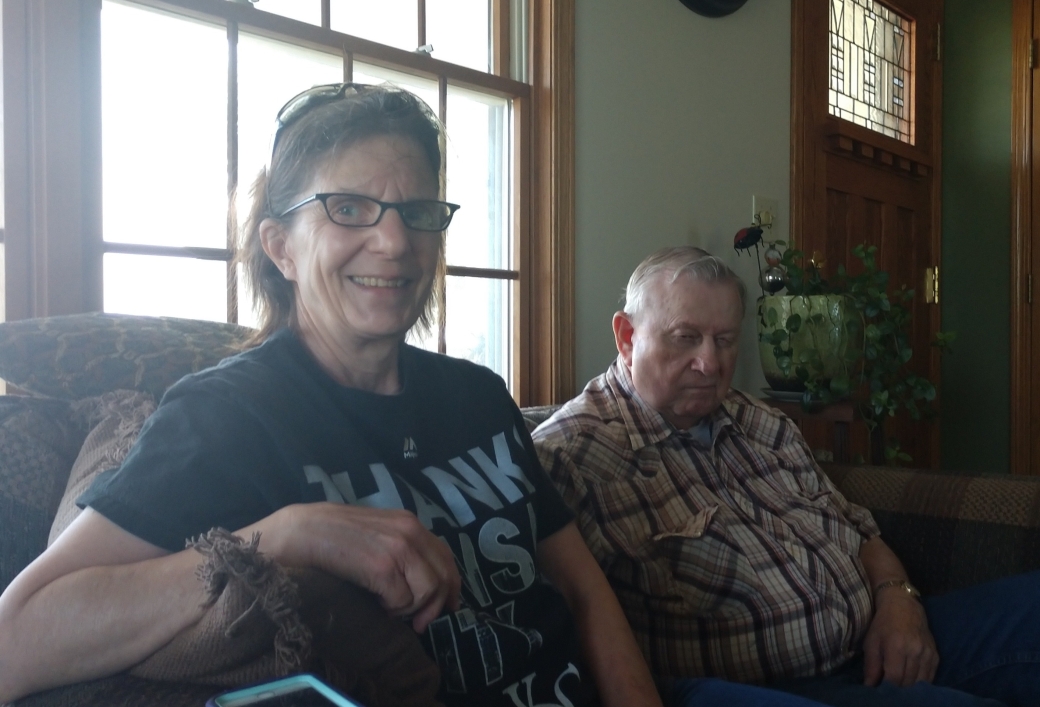 Every year in July, the Leadsled Spectacular converges upon the small city that Suzanne and I live in.  About 2000 classic cars and other automobiles gather in one of our city parks, with the owners showcasing their classic treasures to anyone who wants to see them, including us.  These people form a unique group, traveling from wide and far to meet with others just like them, others who share their passion.  They display them, drive them in a parade, and some enter theirs in a drag race.  Many of them drive them from far away, perhaps a small percentage of them are hauled here on a trailer, but most of them hop in and hit the road.  I saw many of them on the interstate headed toward our city late last week, and many of them cruising around town.

They, too, know the value of Travel Therapy.

At everyone’s disposal, and in varying amounts, we have the same basic three resources:  time, energy and money.  Traveling takes all three.  There was a time in my life—and in Gail’s and Suzanne’s too—when all three of these resources were spent in almost their entirety on our families.  And that is the way it should have been.  This may be the way it is for you as well, and traveling is low on the priority list.  I get it.  But—if there is any way to pull off even a short trip, even a day trip to a local attraction, then do it.  Getting out of the house has the magic power of getting you out of your head.  Seeing new sights, experiencing new places, eating new foods and perhaps meeting new people is just the elixir you may need to jump start your state of mind into a higher place.

Then, when you come home and feel yourself slipping back into the old, lackluster groove, pull out those memories and suck on them like a piece of hard candy.  Get that flavor back.  And then start planning your next getaway. 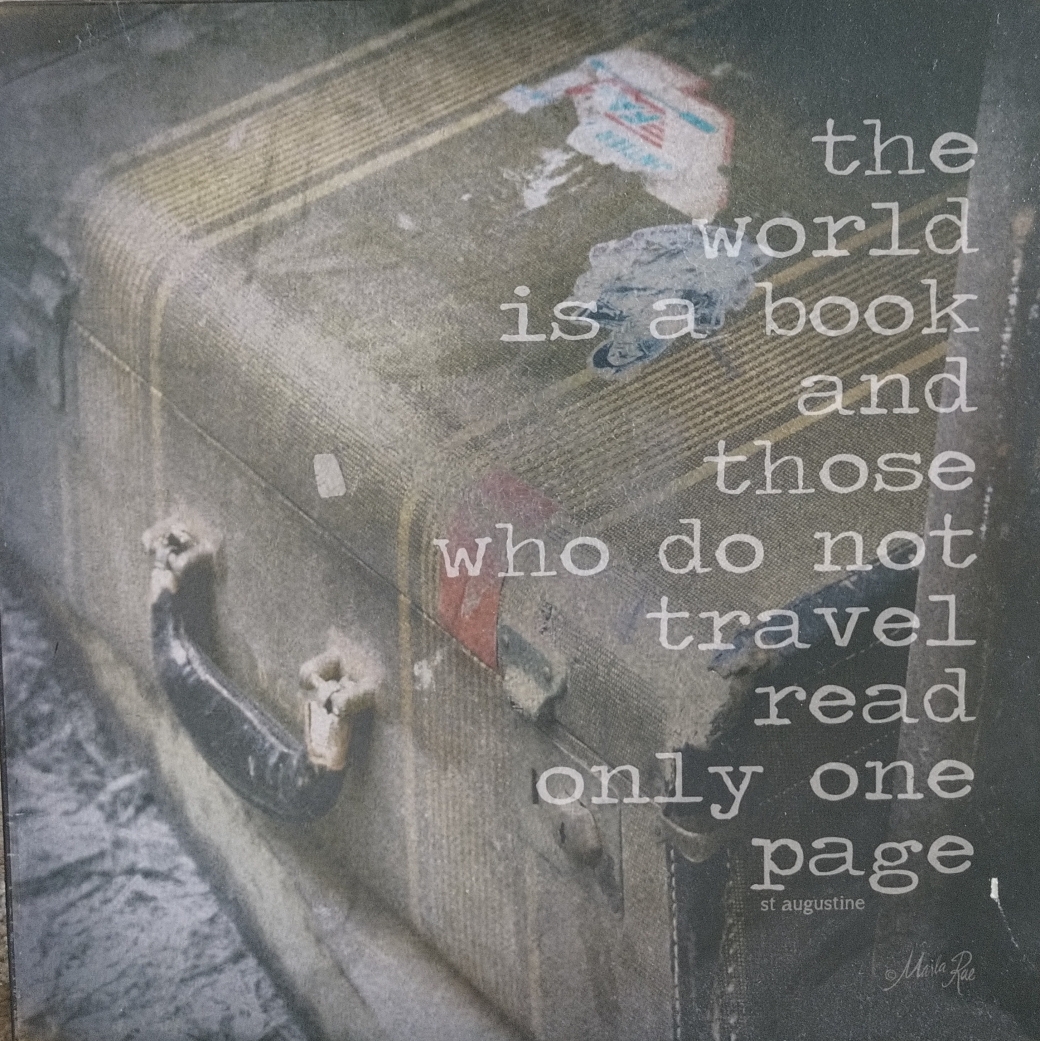