My stomach hurts.  It’s been hurting for three days now, but that’s not a bad thing.  It hurts because I laughed so hard with Gail on our road trip this week.

I’ve shared this picture several times before, and it bears repeating once again.  Mom saved calendar pages, quotes, clippings and other small ditties that spoke to her in this box, with the drawing from one of her favorite artists, Mary Engelbreit. 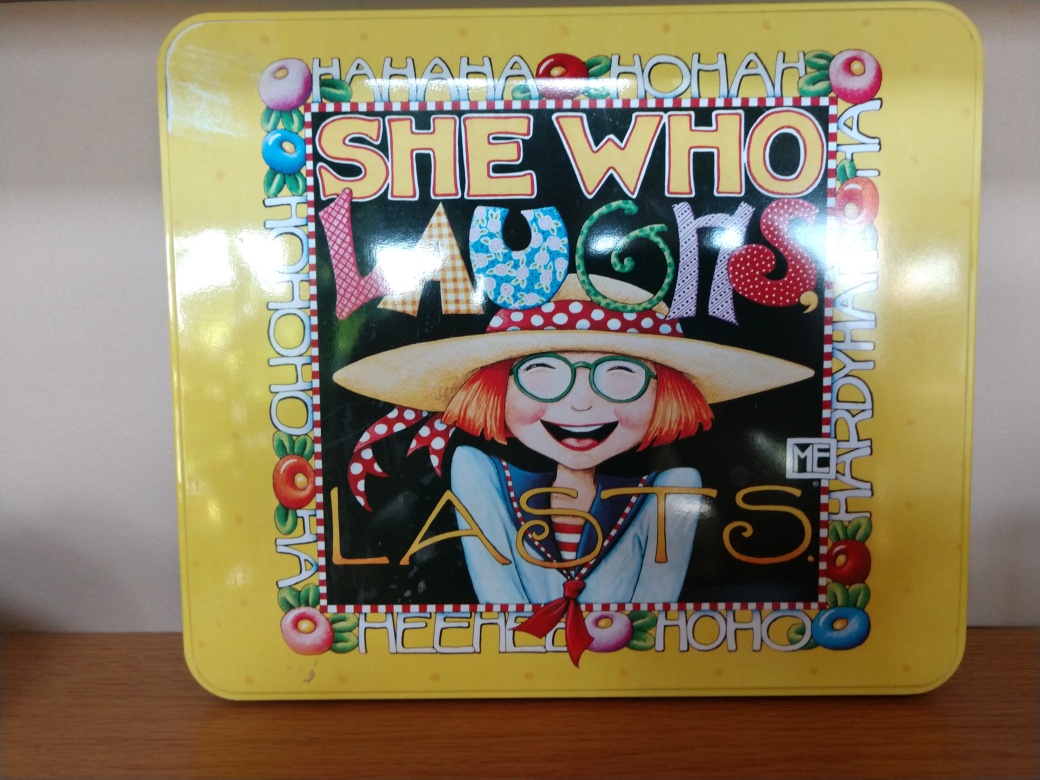 If this is true—which we wholeheartedly believe it to be so, then Gail, Suzanne and I should last a long, long time.

Gail and I took a road trip last week.  Suzanne, while she enjoys—and often creates– raucous laughter just as much as we do, doesn’t enjoy live music as much as Gail and I do.  This time, it was a repeat for Gail, but a new experience for me.

We took a look down this eastbound road,

and right away we made our choice.  East to Columbia, Missouri to hear one of Gail’s favorite rock-n-rollers:  Bob Seger.

He played in the Mizzou Arena to us, and approximately 14,998 other fans like us.  And by that, I mean I saw no one in the arena who appeared to be under 40 years of age. 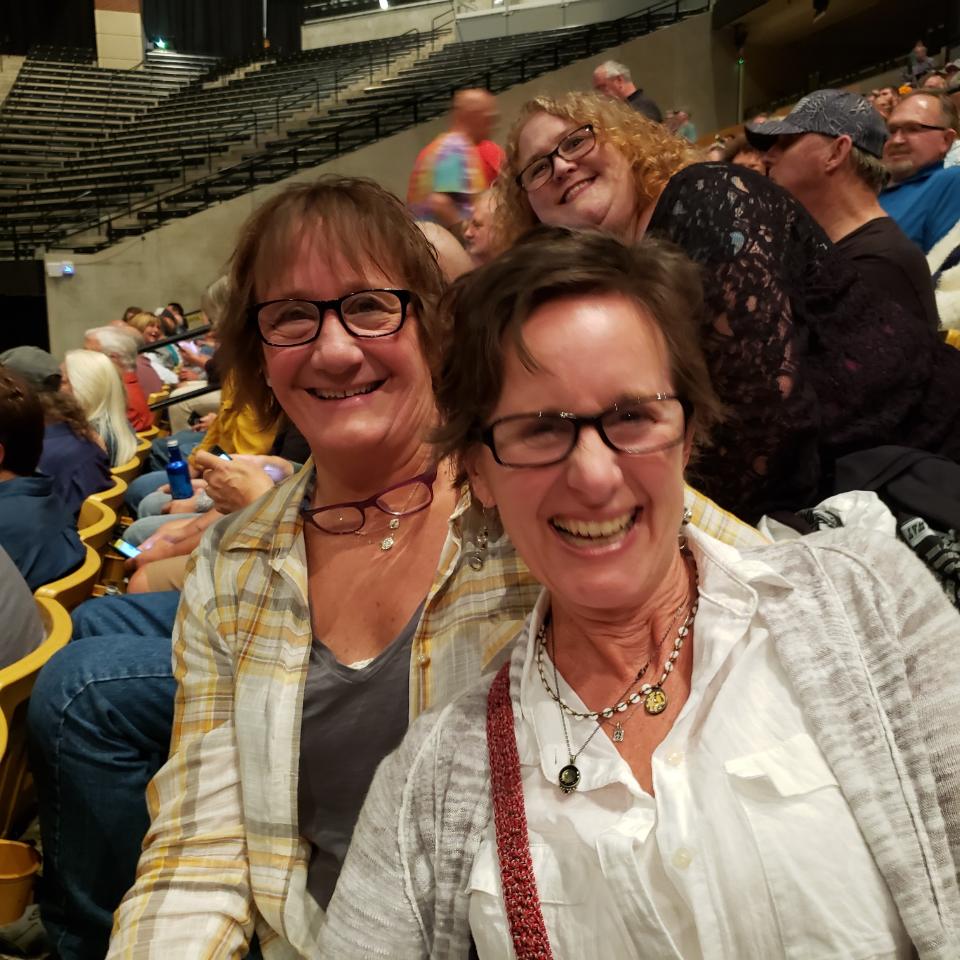 Gail saw him last May in Tulsa (Concert Quests and College Towns, May 5th), and when he added more dates to his farewell tour, she talked me into the 4 ½ hour trip  (almost 8 for her).  How do you say no to that?  Quite simply, you don’t.  While he was not technically on my Bucket List, how could I resist such an excursion with Gail?  Gail, who has enjoyed Bob’s music for years, Gail who makes any event—sometimes even funerals—an occasion to have a good time, Gail, my dear, one-of-a-kind big sister.

Of course, without hesitation, I said “yes.”

She took a look down her east-bound road early Thursday morning, and arrived in Abilene to pick me up when I finished up my day early.

Because if you are Gail’s friend, then you are her friend for life, she had the occasion to renew an old friendship when she arrived at the Abilene Hospital.

Gail and Katie were roommates in college in 1978, and hadn’t seen each other since 1983.  Katie has been a nurse here for 25 years, and I have had the pleasure of working with her for almost six years.  When we realized this was the perfect opportunity, Gail and Katie had a brief, but meaningful reunion.

We arrived in Columbia with a little time to spare, so we made ourselves at home. 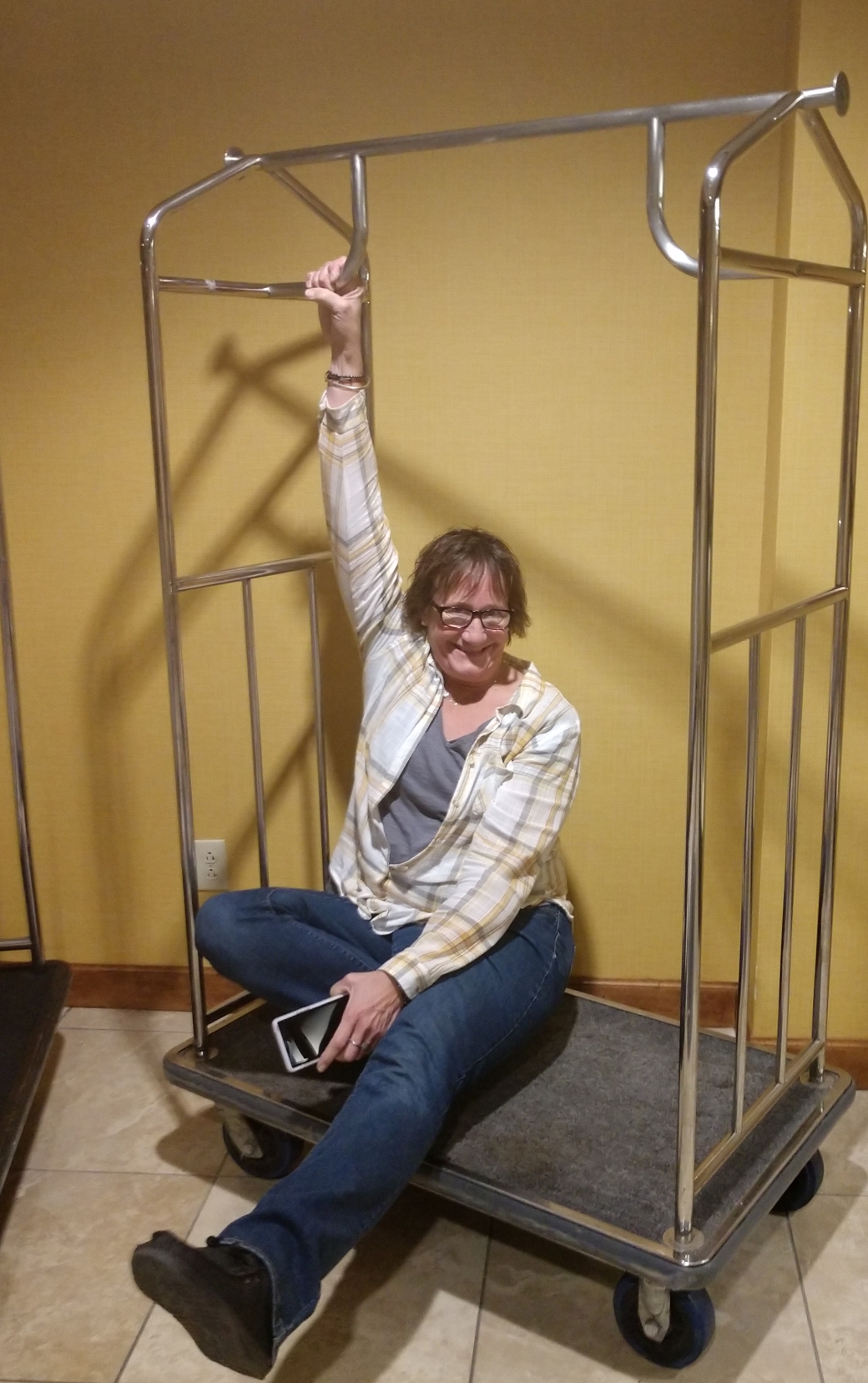 We planned to walk the short distance to the arena from the hotel, but when a mini-van taxi had only two people in it as we stepped out, we asked if we could split the tab.  They hesitated a bit, but then agreed.  In the four minutes it took to get us to the show, the passengers and driver were laughing too, courtesy of Gail.  Walking the rest of the way through a parking lot, we saw this:

I thought Gail was a diehard fan, but I think this fan has the edge over her.

I’m pretty sure that the best wordsmith around couldn’t come up with words to describe the show, because there are none.  It was, perhaps, a life-changing experience—at least for the night.  Bob still rocks with all of his “Old Time Rock and Roll,” doesn’t miss a note on the piano or the guitar and played so many memories for us, and everyone else too, I’m sure.

He introduced The Silver Bullet Band toward the end of the show, with each one taking a bow—most of them were well over forty as well, and had been with him for most of his career.  When his drummer stood up, his T-shirt caught my eye.  In July, I wrote about the classic car show that came to our small city (Travel Therapy, July 28th 2019).  His shirt was a souvenir tee from that show, the “Leadsled Spectacular,” with “Salina, Kansas” printed below that.

It made me smile, and so did this, when I found it on the step as I approached my seat at the show:

As the really good ones always are, the show was over too soon, and we made our way back to the inn.  It was later than my bedtime (which doesn’t take much), but we stayed up later than that, because it is impossible to sleep while one is laughing so hard.  We traded banter using Bob’s lyrics, twisting them into jokes, most of which could be understood only by us.

We thought about going out and making it an even later night, but we decided that Betty Lou’s not  getting’ out tonight.  We weren’t up for a Shakedown, even though we could still feel The Fire Inside.  Call us losers, but deep inside, we were fulfilled from the show, and felt like Beautiful Losers.

It was time for sleep, so we got some.

The morning came too soon, and we were forced to take a look down this westbound road.  We had no choice; duty was calling at home.

About an hour into the trip, we couldn’t help but notice this license plate, jumping out at us on I-70 as we passed it:

As you can imagine, we got a little excited, feeling sure there was a kindred spirit inside that Jeep.  Gail promptly rolled down the window and waved with three fingers, and she waved back.

We kept pace with her for about half an hour, but the ebb and flow of traffic eventually separated us.  We had hoped for the slim chance at an opportunity to meet this woman who obviously was one of three sisters, but we let that hope go.  Apparently, it was not meant to be.

At our next pit stop, however, I came out and there she was, filling up with gas.

Meet our new BFF Irma from Alton, Illinois, sister to Velda and Robin.  Not surprisingly, we had no qualms about introducing ourselves and sharing our story.  She already feels like an old friend.

Music can be a healing balm.  It certainly is for us.  We felt fulfilled, and I know we are both still a little high from the show.  The pounding rain on the last half of the trip home didn’t dampen our spirits, even though we had to drive Against the Wind, then say goodbye too soon.  I had to pay all my attention to the road as we passed through downtown Kansas City as it rained, so Gail fed me my Burger King lunch.   We thought we had laughed ourselves dry, but not so. 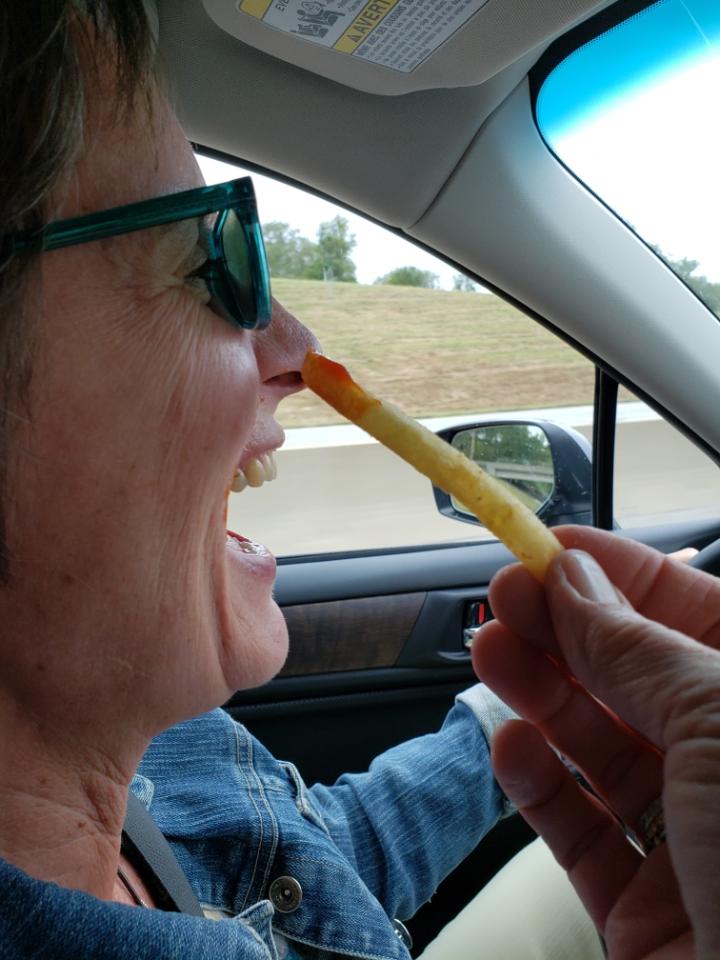 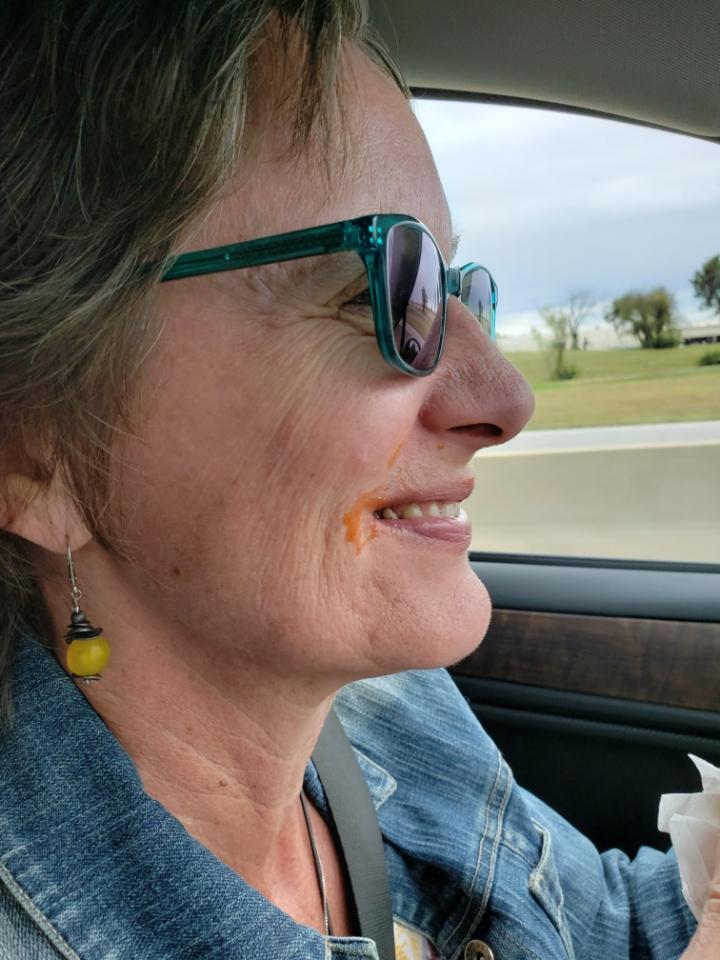 In three weeks, she will accompany me on a westbound road, making our fall trek to our Rocky Mountain High.  Suzanne is planning on joining us this time, and we are counting down the days.

Just as with this trip, we will tell some, but not all.

“Laughter is the best medicine.”  This idiom is so true, literally and figuratively.  I’m pretty sure one could never overdose on it.

Unless something begs to be written, I am taking a fall break from writing.  I will be back with another travel story if, and when, we return from Colorado.  Until then, keep laughing.