A BLUE AND GRAY RIBBON

Imagine your immune system as an army, armed and ready to fight off any and all enemies.   It is a well-trained, disciplined and dedicated team of soldiers.  When an invader, such as a cold or the flu tries to take over, your immune system soldiers mobilize and defeat the enemy.

Most of the time, they do their job quite well.  They recognize the enemy and they know the allies in your body as well.  They are there to protect and serve them.  They do their best, but unfortunately, sometimes we still get sick.  Mercifully, most of us bounce back from illness, and our immune system army has been made even stronger having this battle behind them.

Now, imagine that this army has had a mutiny; the soldiers decide to fight for the other team, and an evil and dictatorial military leader has taken over.  He is commanding them to attack their own.  And they do.

This is what an autoimmune disease does.  The immune system sees its own body, its own master, its own homeland as the enemy, so it attacks.

Type One Diabetes is an autoimmune disease, long with a too-long list of other diseases, including:

And the list goes on for far too long.

When a person has an immune system disorder, the immune system cannot be recruited back, cannot be re-programmed to return to fight in its homeland, for the home team.  It must be countered with multiple medical interventions.

And so, the life of a Type One Diabetic must depend upon these interventions.  Pictured below is Lydia’s first year of insulin and supplies. Maybe you knew already, but I didn’t.  And I thought I learned a lot in the last year since Gail’s daughter Lydia was diagnosed with Type One Diabetes.  But I didn’t know that:

*Type One Diabetes is the second most common chronic illness in children, behind asthma.

*Type One Diabetes mortality is greatest in infants, toddlers and preschoolers due to lack of diagnosis and dehydration.

*Almost all cases are diagnosed before age 40, with the vast majority before 18.

*By 2050, the incidence in teenagers and children is predicted to triple, with the average age increasing.

What a difference a year makes.  Thirteen months ago, Gail’s daughter Lydia was handed a diagnosis that would forever change her life.  Forever.  As in, every day for the rest of her life.  As in, if she doesn’t monitor her blood sugar and act accordingly, she could die.

She has no choice but to act.  She doesn’t get a day off, not even on Thanksgiving Day.  So, this Thanksgiving holiday, she will not be able to simply eat whatever she wants and pay the price only in feeling stuffed and sleepy.  She will have to plan ahead, by counting the carbohydrates in everything she plans to eat, right down to the creamy sauce in the green bean casserole.  While I, and everyone else in our family simply eat whatever we choose—and likely too much of it—she will be monitoring her intake of all those luscious carbohydrates—mashed potatoes and gravy, dressing, dinner rolls, pumpkin pie and cake, pecan pie, as well any and all sauces, condiments, snacks and drinks.  She will have to pre-empt any blood sugar spikes by injecting herself with insulin before she eats, something she does 4-6 times every day, every day of the year.  And she will do it with her sweet smile, as all of us simply eat without thinking about the possible consequences.

“Thanksgiving is coming around and I love to eat all the sweets but let me tell you about my mom’s stuffing–it’s soooooo good!  I plan on eating as much as I want, so I will dial up the insulin in my pen, and I will cut back on the sweets so I can eat more potatoes and stuffing.”  –Lydia, on anticipating Gail’s locally famous Thanksgiving dressing.

Because I am a word nerd, and I like to know word origins, I decided to look up the word “stroke.”  Having worked with strokes for about 20 years at the time, I wondered why we call it as such.

From several online sources, I gleaned this information:  As far back as 500 years ago, when someone had a stroke and they truly had no idea what had happened to that person in just one moment, they decided that person must have been stroked by the hand of God.

Now, 500+ years later, we know more about strokes than we did then—not everything, of course, but we still call it a stroke.

Diabetes: Greek—to siphon.  One source reports it was named in the 1560’s by Aretaeus the Cappadocian, a Greek physician.  Another states it was named in 1552 by Hesy-Ra, an Egyptian physician.  Named as such because of the excess sugar found in blood and urine, as if it has been siphoned.  Excess urination is a classic sign of diabetes.

As you can see, I had to know where the word diabetes came from, too.

Gail is a word nerd, too.  She told me that she recalls being fascinated by the term islets(pronounced eyelets) of Langerhans in high school anatomy/physiology.  They are regions that house the cells in the pancreas that produce insulin, the absent hormone that causes Type One Diabetes.  Little did she know that almost 40 years later, her daughter would be lacking these cells, causing her to develop Type One Diabetes.

In Not Her Type, (February 4th),  I wrote about the differences between Type One and Type Two diabetes.  If I can reiterate one point I made then, it is this:  there is no known method of prevention or cure for Type One.

If I may paint a picture with words, it would be this:  imagine having to find a way to pump your own heart, and expand and compress your lungs because they can no longer do it on their own.  In Type One Diabetes, the medical interventions are in place to find a way to replace the insulin the pancreas no longer produces, so that the food you eat can be converted to glucose in order to provide the fuel to make your body go.  Just like when your car runs out of gas and can no longer go, the body runs out of glucose, which is your fuel. And then, just like your car, you can no longer go. 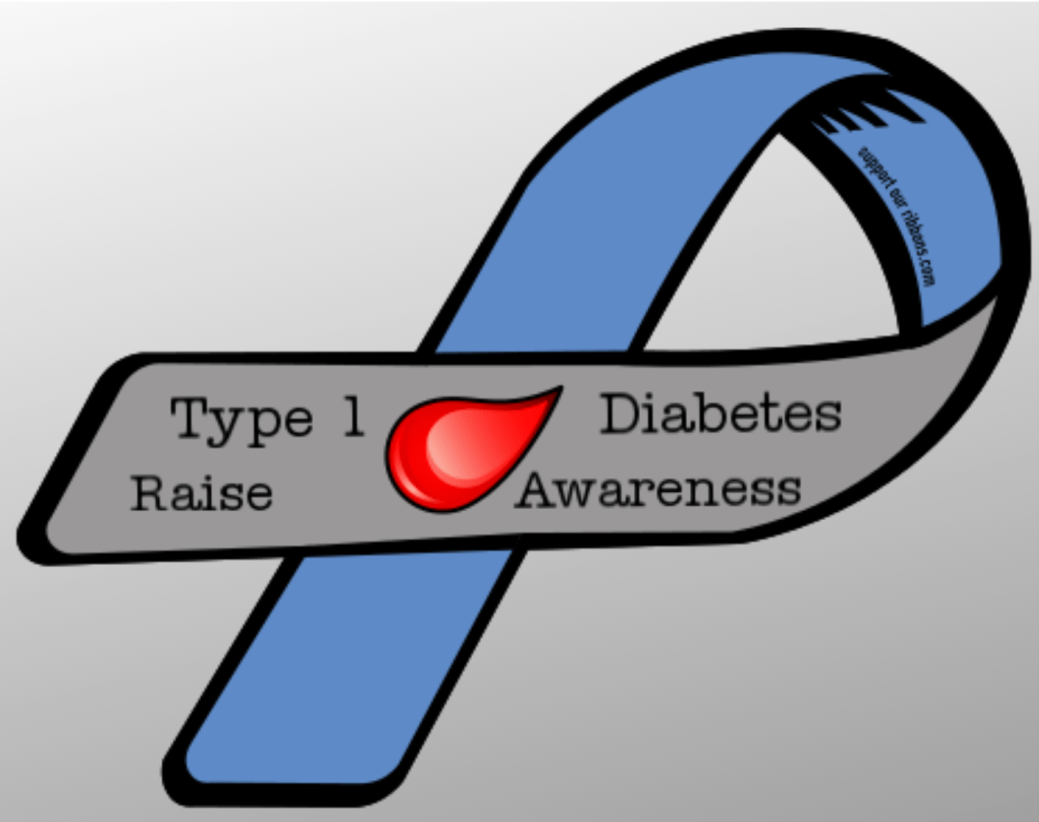 Perhaps you are tired of yet another “awareness” campaign, another month dedicated to awareness of yet another disease you don’t have to worry about.  I get it.  I get how you may feel bombarded by yet another colored ribbon.  I’m not here to say you should focus on diabetes awareness above all others.  Like every other diagnosis/disease, it is best to know the symptoms, so that you may save your own life or that of someone you love.

In addition, if you already know someone who is affected, it is a gesture of caring and concern to educate yourself about what they are going through with their disease.

Type One Diabetes was formerly called “Juvenile Diabetes,” because it was typically diagnosed in childhood.  This is still the case, but not always.  A close friend’s brother was diagnosed at age 51 since Lydia’s diagnosis.  I can now speak the language with her, because I understand it so much better.

While the exact level of association is widely estimated, there is a genetic link in Type One diabetes.  My friend also has a nephew—her brother’s blood relative—who has Type One Diabetes.  Unfortunately, their family already spoke the language.  To my knowledge, Lydia has no close relatives with Type One Diabetes.

So, Lydia has Type One Diabetes, but it doesn’t have her.

She fights it every day, measuring her blood sugar, then counting carbs before she eats them, and, finally,

injecting herself with insulin.

“I feel a thousand times better than I did before I was diagnosed, but when I go to bed at night I wonder how I will feel when I wake up as some mornings I don’t feel great.  I try to remedy this feeling at bedtime by eating something with carbs, then protein by helping my blood sugar to remain at a safe level.”

“Sometimes I wonder if I should eat carbs because insulin is so expensive.  I dread taking shots to cover the carbs, but I have gotten used to it.”

Most of us only worry about what carbs will look like on our hips, not on our bank account.

Please enjoy Thanksgiving dinner this week.  If you are not diabetic, be sure to give thanks for that gift.

If you have Type One Diabetes, don’t let it have you, and please enjoy your Thanksgiving dinner.

If you are close to someone with Type One Diabetes, let them know you are thankful they are fighting the good fight.  They really have no choice, but hearing this from you will be a gift to them.

Stay aware, keep fighting and give thanks.  You Can Do It.

Thank you, Lydia, for raising my awareness.  You are a warrior.

The response to last week’s post, “The Magnificent Seven,” which introduced you to the Greif sisters and their travels, was overwhelming.  If you and your sisters have a story to tell–travels or no travels, or if you know an amazing group of sisters who stand out among sisters, please let us know.

5 thoughts on “A BLUE AND GRAY RIBBON”