THE THRILL OF THE FIND

It’s that time of year again. And, despite all that 2020 has had taken away in its first half, the beloved garage sale did not fall prey to our new culture of COVID. There may be a few changes, and requests to distance and wear masks, but the all-American garage sale is back.

Suzanne and I are thrilled.

Garage sales were a distant reality when we were growing up. For starters, we lived in a rural area outside of a small Kansas town. And—perhaps most importantly, it seems that when we were kids, people didn’t consume material goods only to sell them a short time later in a garage sale. Most families—ours included—bought only what they needed, and used it until it was no longer able to be used. When we outgrew clothes, they were passed down to the next kid, or perhaps given away to someone else’s kids.

Suzanne reminisced about the first garage sale she ever went to. She was ten years old at most, and we were in Wichita visiting our grandparents. There was a garage sale across the street from them, and she walked over with Mom and our younger brother.

“The idea of shopping in someone else’s driveway was the coolest thing I had ever seen, and I thought ‘why don’t more people do this?’”  she recalled. “And then it was probably at least ten or fifteen years before I went to another one.”   She has loved them ever since.

There are almost three times more storage facilities in America than there are McDonald’s restaurants.   We have become a culture of “stuff,” as evidenced by our need to store it outside our homes. Storage facilities have boomed since 2011, per U.S. Census data regarding private construction spending. In 2011, $241 million was spent on mini-storage facility construction. In 2018, that number had increased to nearly $5 billion. Americans need more space for their stuff.

There is my trivia for this post. My hope is that it helps you understand the surge in the “stuff” that shows up in garage sales. Suzanne and I aren’t complaining, it provides the basis for one of our favorite summer pastimes.

Gail is not a garage sale-er. She does enjoy estate sales; she even has the power to create one when there was not one planned. I’ll explain.

Perhaps you remember that she purchased “Lola,” a 1974 Chevy Nova from the family of a dear woman named Lola, who had moved to the nursing home in her small town. She treated herself to this gem as an early 60th birthday gift.

As Gail does with people she gets to know, she got to know Lola’s family quite well. So, when Lola passed away several months ago, Gail was in touch with her son, who was making arrangements to clear out his mother’s house and eventually sell it and her remaining possessions. Gail, in her usual style, stepped in and offered to take a few things off his hands. What started as a few small transactions became a one-woman estate sale. 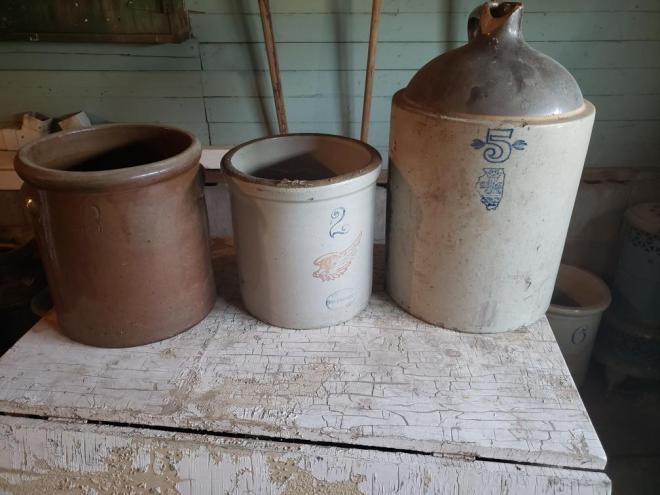 The fixtures and the furniture were too much for Gail to pass up. 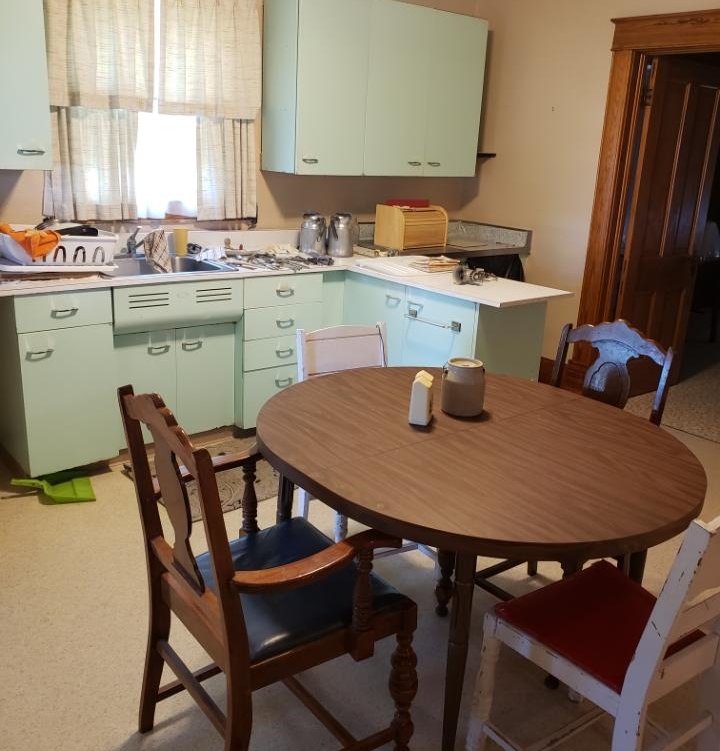 The retro kitchen speaks for itself.

On top of many treasures that Lola’s son sold to her, Lola’s house is now hers as well.

It may become a vacation getaway, a hunting lodge, a weekend rental, or all the above. It may become a hangout for Gail. With Gail, all things are possible.   And these are all good things.

Suzanne and I had a grand plan for our Saturday morning garage sales. The small town of Lindsborg, Kansas is just 30 minutes from my home, and this “Little Sweden” community was hosting its annual community-wide garage sale event. 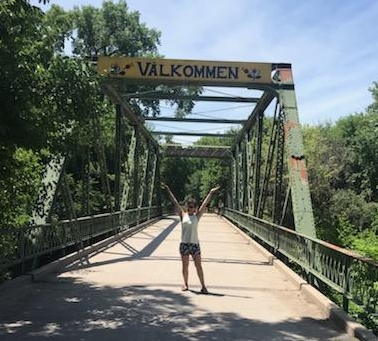 We arrived early, and I found my greatest treasure of the day at the very first sale. It seemingly jumped off the table into my hands as I walked up the driveway.

As a bonus, we saw someone we knew at the first sale. We even got to see her again at another garage sale later in the morning.

Lucy was Gail’s area supervisor when she managed the Osborne Pizza Hut.  Suzanne worked there, too, so she knew her then as well.  Now retired, she lives in Lindsborg and she enjoys her time off doing whatever she pleases, including going to garage sales, and spending time with her granddaughter, Chloe.

If this picture looks familiar, that’s because Lucy made the four-hour trip to Gail’s birthday party in February, shortly before the COVID shut-down. Gail makes friends even with her own boss, which likely doesn’t surprise you, if you know Gail. 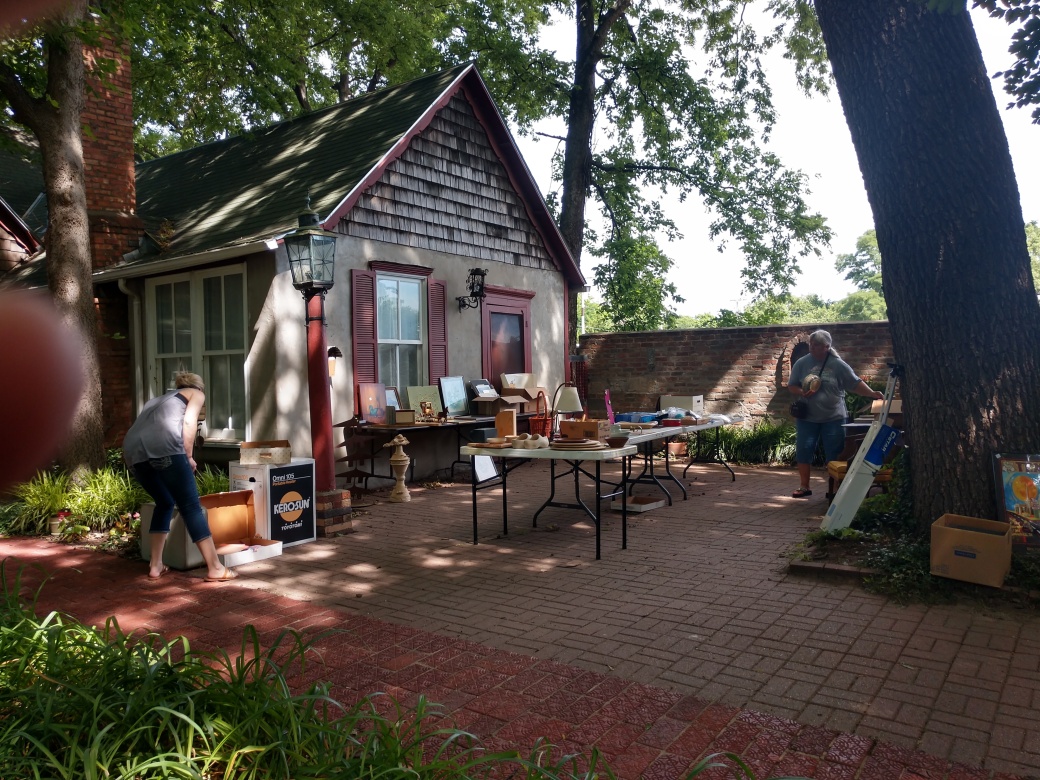 We found Lucy for the second time in this beautiful outdoor haven, in the courtyard of a local museum, dedicated to a local artist.  I found a few other treasures there, too. 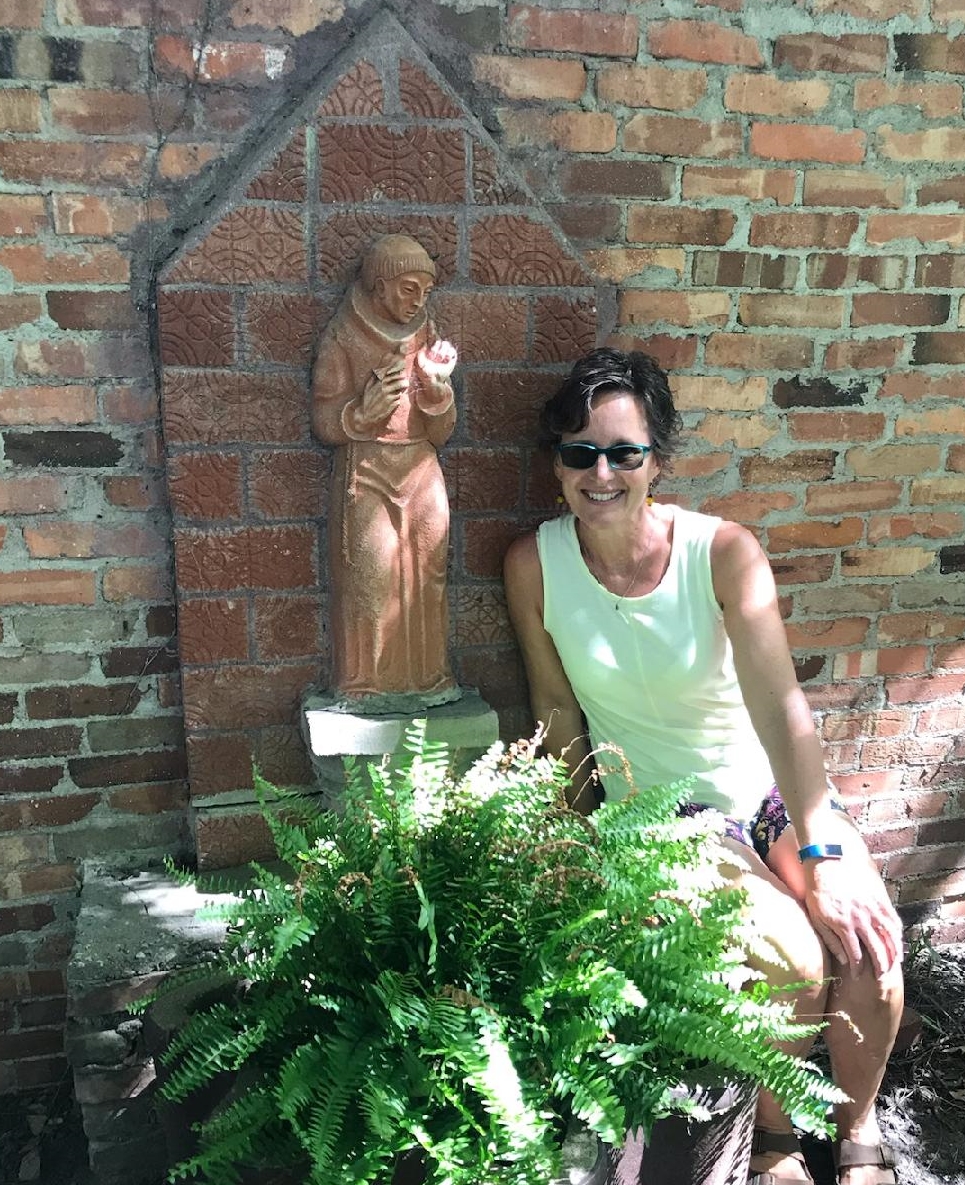 He sculpted this statue of our favorite saint–Mom’s too, Saint Francis.

Suzanne’s favorite find of the day cost her an entire quarter:

This picture was the second runner-up:

The town is a beautiful burg, with unparalleled Swedish—and American—charm. 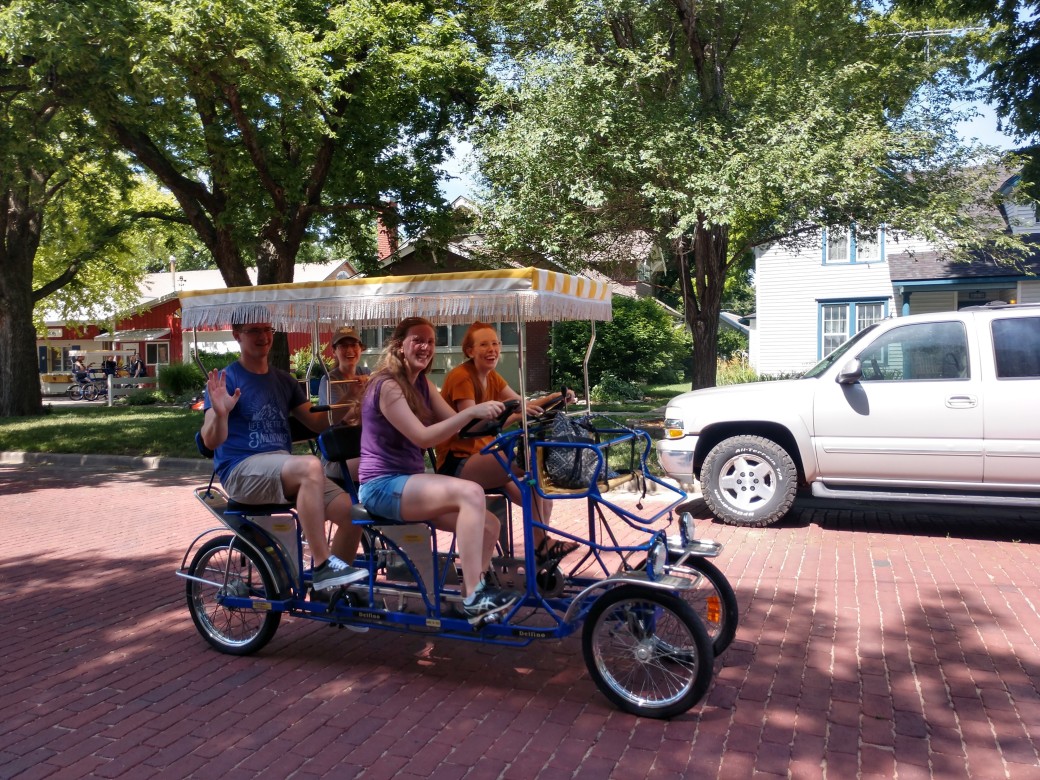 If you haven’t visited, I highly recommend you do.

As noon approached, the sales dwindled, and we had plans to scoot on down the road to Hutchinson, where Suzanne needed to pick up a small dresser she had purchased at a garage sale when nearby Inman had their city-wide sales. She went with a friend, and left it at her house. After a delicious lunch and the dresser pick-up, we got to go to my favorite store:

It had been over five months, much too long.

We’re already jonesing for the next round of sales. Even though Suzanne is the minimalist, she enjoys finding new treasures when they feel just right. Unlike her sisters, she wants to find only a few things, and she is satisfied.

I typically overdo it, and send a few things to my give-away pile as soon as I get home. But that’s part of the thrill for me, the thrill of the find. Which likely explains why I love to shop at my favorite store pictured above.

I just wish I wasn’t thrilled by so many treasures, and so does my husband. But he knows me well enough to know what brings me small measures of joy, and he knows I will pass them on in due time.

Life is full of treasures, and I don’t mean just at garage sales. Greater than that, there are many joys to take from life, many treasures that can’t be purchased at a garage sale or any store.

Whatever it takes, I hope you search for and find the meaningful treasures in your life. You’ll know them by the thrill of the find. 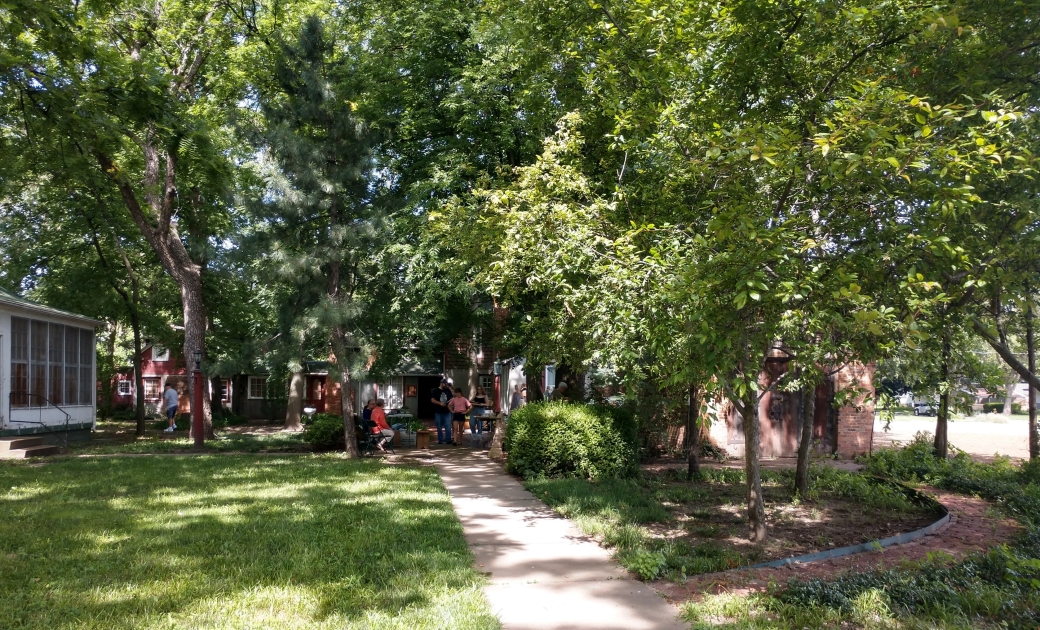 8 thoughts on “THE THRILL OF THE FIND”